The following synopsis of the rich history of the Town of Moraga was written by Maggie Skinner, Archivist, Moraga Historical Society. 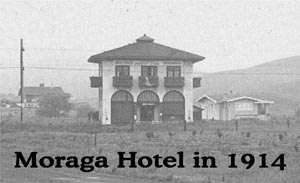 The Town of Moraga is named for Joaquin Moraga, the grandson of Joseph Joaquin Moraga who was second in command of the Anza expedition of 1776, the founder of San Francisco, Mission Dolores and the founder and first commandant of the Presidio. Joaquin Moraga, who also served in the military with his father Gabriel Moraga at the Presidio of San Francisco, left the Army in 1819. He and his cousin, Juan Bernal, received a 13,316 acre land grant from the Mexican government in 1835. The original land grant, known as Rancho Laguna De Los Palos Colorados (Ranch Of The Lake Of The Redwoods), included parts of Orinda and Lafayette and the communities of Canyon, Redwood, Rheem, and Moraga.

Joaquin Moraga built an adobe on a hill overlooking the Moraga Valley in 1841. The adobe home still stands on a knoll in Orinda above Miramonte High School with a poplar tree-lined driveway going up to the house. It was designated a California Historical Landmark in 1954. It is probably the oldest existing building in Contra Costa County. The original adobe was built with three rooms; living room (salon-dancing room), bedroom, a long verandah, and an outside kitchen. In 1848, when Joaquin’s son Jose De Jesus moved in, the adobe was expanded to accommodate a large growing family. The Don Manuel family made considerable changes in a remodeling done in the 1960’s. The adobe today is a private home and not open to the public.

The Moraga rancho was a cattle ranch. Hides and tallow were sold to San Francisco shipping lines or exchanged for merchandise. Life at the adobe was successful and comfortable for the Moraga Family. It included Indian servants that lived in a lean-to on either side of the adobe. There were many fandangos (festive dinner-dances), barbecues, and all night dancing in the adobe salon, which was the only room in the house with a wooden floor (built with Canyon redwood).

When California became a state in 1850, all the land grants had to be confirmed by the new state. Hiring an attorney to fight for their land was very difficult for the Moragas as they were Spanish speaking, illiterate, and had no money - only land! With the gold rush came many settlers, who were squatters on the Rancho and this led to much trouble for the Moragas. A dishonest, land-hungry attorney from Oakland, Horace Walpole Carpentier, using all his legal knowledge, retained ownership of the rancho by 1886. The naive, illiterate Moragas had lost their rancho.

The Moraga Company also sold land to developers and subdivided land itself. They established the Townsite of Moraga in 1913 and tried unsuccessfully to sell lots there.

This period, 1912 to 1913, brought the Oakland Antioch Railroad to Moraga with service from Oakland to Chico through Moraga. Later, this line would become the Sacramento Northern Railroad which served many early residents of The Moraga Valley. The Moraga Company built a two story hotel in Moraga as a promotion to help the sale of land in The Valley. It later became a mercantile store, library, and eventually a bar - today called The Moraga Barn.

Much of the early real estate development for the Moraga Company was in what today is Orinda. Moraga extended to and included The Crossroads. Most of the early Crossroads businesses used the word Moraga in their name. Some of the developments along Moraga Way were Moraga Oaks and Encinas De Moraga. Fifteen tracts with the Moraga name were built in what today is Orinda.

In 1927, The Moraga Company offered 100 acres free to Saint Mary’s College and College of Holy Names. They felt a college would bring culture and people to a very barren area and help the Moraga Company sell homes. Only St. Mary’s College accepted the offer and bought an additional 300 acres. In 1935, most of the land was bought by Utah Construction Company. Many subdivisions and homes were started. Utah later sold the remaining land to Russell Bruzzone, a Lafayette developer who developed much of the property.

Most of the homes, roads, and businesses in present day Moraga were built since 1960. For many years, The Rancho was owned by a single person and used for farming, agriculture and cattle grazing. Only 20 farm families remained on The Rancho for many years. One of these farm families, the Jesse Williams Family, was the only farmer on the entire rancho who never gave up his property to Carpentier. His farm was later sold to the Lucas Family. They sold a 20-acre parcel to two young women who built a one story Spanish style ranch house. In 1934, Donald Rheem bought the house and property. He was the son of William S Rheem, President of Standard Oil Company. Rheem transformed the home into a lavish estate where the famous were entertained. He bought many acres in Rheem Valley and built many homes and subdivided his properties.

When James Irvine died in 1947, Rheem was approached as a likely buyer of the Moraga Rancho, but Utah Construction and Mining became the buyer. Since the early Utah Construction subdivision days, Moragans banded together to keep developers from overbuilding and changing the rural peaceful community. This formed a pattern for resident participation in local affairs. Moragans can brag of true commitment to their Town. This led to incorporation as the Town of Moraga in November, 1974.